This past Sunday, the Contractor, Diane, Jim and I went to the 33rd Annual Oktoberfest at the German-American Social Club of Cape Coral, Florida and had the most FANTASTIC time!!

Every year in October, the club organizes Munich in Cape Coral. The Cape Coral Oktoberfest is the largest party of the year in the community! It is THE event for fun, good food, freshly poured domestic and German beer, live music on several stages, laughter, dancing – with or without the chicken hat -simply put – it’s that famous German Gemütlichkeit. 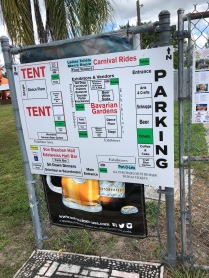 And OH boy did we have FUN!!  We went around and tried different beers, foods and watched all different entertainment.  Below is a video of the Hafenkapelle Band playing a song that involved a man playing a part using spoons.  The song was simply beautiful and I had to record it for you to all listen!

Next, the Contractor dragged me to the stage to perform the all important CHICKEN DANCE!!  Because, apparently, its not Oktoberfest until you’ve performed the Chicken Dance, Right?!!

Next, we watched a performance by the Lee County Pipes & Drums.  They were incredible!!  Blew our socks off!  I highly recommend checking them out – remember this event is going on October 26 – 28, so you still have time!! 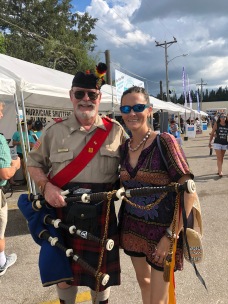 We then went to the main food tent and had Jagerschnitzel, cabbage and noodles.  Jagerschnitzel in German means “hunter’s cutlets.”  Did you know, Germans originally took wild boar backstrap to make the dish, but now use veal or pork, pound it thin bread and fry it?!  They then cover it in a think brown mushroom gravy.  American’s can liken this dish to chicken fried steak.

After eating, Diane, Jim and I play a raffle for The Dek Pizza in Cape Coral and Diane WON the highest prize!!!  Diane won free beer for a year, Jim won three free drinks and I won one free pitcher of beer – not too shabby for a free raffle!!  To celebrate we did a celebratory round of jello shots! 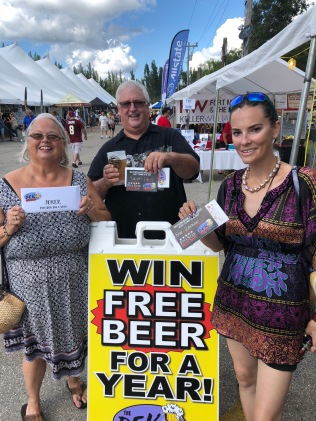 At the end of the day we relaxed and had one last shot and called it a day!  We had such a fun time at Oktoberfest!!  It was an event that I would highly recommend going to!!

Are there any events that you enjoy going to?  Any events in Florida that would be good to feature on my blog?

That’s it for now